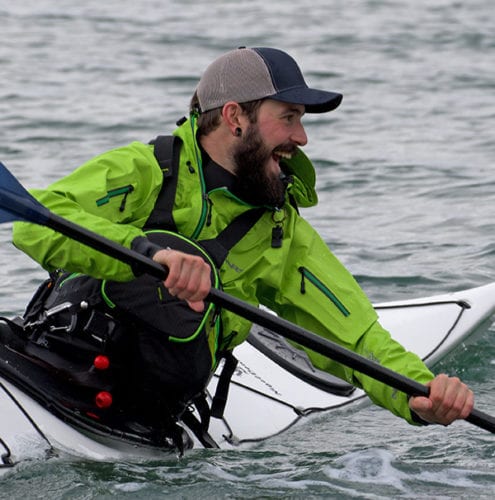 Happiest in the seat of a kayak, Alex is passionate and enthusiastic about all forms of adventure sport. He can most commonly be found floating down his local rivers, coastlines, or exploring waterways across the globe.

As owner of Body Boat Blade, Alex truly lives his passions of paddling and coaching daily. While spending a majority of his time on the sea, Alex is also an adept whitewater kayaker and open canoeist, having completed courses through British Canoeing in these disciplines as well. Alex found a love for the outdoors at a young age growing up amongst the gorges, lakes, and hills of Ithaca, NY.

His foray into paddlesports began as a raft guide on the Black River in New York State and then transitioned deep into the world of paddling while at SUNY Plattsburgh where he earned a Bachelor’s of Science in Expeditionary Studies, concentrating in paddlesports and climbing. After finishing school, Alex continued to pursue formal training through British Canoeing while also compiling a strong paddling resume across the United States and the United Kingdom.

He is fully dedicated to learner-focused coaching, helping paddlers achieve their goals through methodical, fluid, and fun, client-tailored programs. When not coaching or guiding, he can typically be found climbing on Mt Erie, working on various woodworking projects, or sampling some of the PNW’s finest craft beers.

Notable places he has paddled:

Whitewater rivers in Nepal by Packraft

Get News and Updates